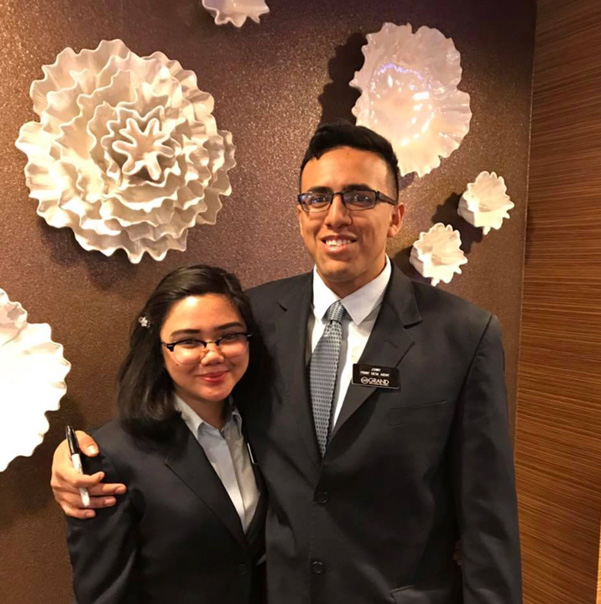 It’s me Dannica Meryll Pelayo from LPU-C, I would like to share my experience and lessons I have gained so far from the program. I am currently working for Grand Sierra Resort and Casino in Reno, Nevada as a front desk agent, which I considered myself as a blessed one because I am the only student who was allowed to become part of their front office team. I was so flattered. Though some think that I was so lucky because I don’t have to do tasks that are too difficult like housekeeping and food serving, still they do not know how big the responsibility is assigned to me. I undergo 2 weeks training for LMS System which I thought would be easy for me since I had my front office class before I flew here. Well, training is fun. I was really nervous during my first day, because we Filipino was taught how to communicate in a proper English but most of my guest were speaking a slang one which was really hard for me to understand. But as the day passes by, I’m starting getting used to it.

My main task is to check in and out the guest and provide them the right information they need. Most of the time I’m dealing with rude guest, but I’m able to handle it since I used to usher in some events, so I do know how to deal and interact with them. It’s just you really need to be emotionally ready all the time.

Most of my co-workers are very kind to me, some of them are Filipino as well. The hotel operation director wants me to go back next year right after my graduation which made me really happy. Oh, and I have also met the SVP of Grand Sierra, Mr. Kent Vaughan he was so down to Earth just like my HOD, he also wants me to go back and work for them.

Taking an opportunity of joining the program was one of the greatest decision my parents and I made. I considered this as one of my stepping stone for a brighter future. It is a worthwhile endeavors that everyone should seek out to be successful in the rapidly globalizing world today.

During the program, I was challenged to adapt both personally and professionally, and the payoff of this adaptation will be enormous. Intercultural communication is a vitally important part of the modern professional world, so it every single peso is worth it to have experience in a multicultural environment. By leaving the comforts of home to immerse yourself in an entirely new culture, you will be pushing the boundaries of what you are capable of. 🙂

Thank you so much for your continuous support to all of us POEC!